The correct number is 50 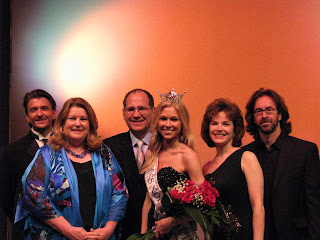 There are many things that can be said about beauty pageants. I would wager that most of them are correct, from the crazed excess of some pageant moms, to the nervous tension on the stage, to desperate acts of sabotage.

And cutting to the chase, yes, there’s still the swimsuit parade, that legacy of the old Atlantic City crowd that founded the Miss American pageant 90 years ago. It’s been recast as lifestyle and fitness, but we know better. It’s still all cheesecake, glam thighs and perky breasts, topped off with a glowing smile.

In a bit of way out of the ordinary booking, in June I was one of five judges in the 2011 Miss North Dakota pageant. I was initially dubious about virtually every aspect of this process, including my participation. But the more I learned, the more I heard, and eventually, the more I witnessed during a very long weekend judging, has turned me from a shrill opponent to someone who would now just as soon say ‘ehhh’ to them.

The official title of the North Dakota pageant is the North Dakota Scholarship Organization. That is of course a misnomer, an attempt to apply political correctness to an ongoing activity that at root remains a beauty contest. (Yes, there is money behind these chiffon gowns, and cheap tiaras. Upwards of $10k for the winner, which can go a long way for a state college student from rural North Dakota, and small batches in hundreds for the also-rans, money that probably gets you back the investment in shoes, gowns, dresses, and travel costs. )

But that’s not the real story. That is what goes on off-stage, behind the scenes, in the judges’ room, at the private homes where the pageant privileged are oiled and fed, and in the off hours during pageant week. That’s where guards come down, ties are loosened, heels kicked off, and the wine and beer flow.

And that is the story of a small American town, with traditional values, caught up in the glamour and potential of being part of something larger, something popular, something distinctly sexier than the everyday happenings in the dusty and distant northwestern corner of an oft forgotten plains state.

To set a picture about the scale out there, think of the characters who live to perform dinner theater, and you immediately have an image of the cast. . In fact, the locals running the pageant in North Dakota for the past 25 years were not at all typical, unless you count a series of couples cut right from a regional performance of ‘La Cage’ and the supportive straight men who assisted their not so prim wives with, literally, the heavy lifting involved in staging this production.

And those were the folks I met on the first night, at our first stop, in town. Over the ensuing days, we saw that all the stops were pulled out for visiting royalty. Well, for us, which in this case were five judges, along with a dozen ‘formers’ as the former Miss North Dakota’s were called. We judges cut an interesting picture, with three folks with North Dakota connections, a schoolteacher, an accomplished dancer, and a former winner herself, now a home school mom to her four boys, along with the state director for the New Mexico pageant, and myself, a former network television news producer.

We were often brought together at local gatherings with the members of the board of the pageant, and the dozen ‘formers’ or former Miss North Dakota’s, ranging from the most recent winners, up to several forty-somethings, each now moms struggling with the same issues mere mortals face in middle age; family, work, spouses, weight.

There was plenty of talk, mostly small talk, as this is a small state, if you measure by population. And in this world, everyone seems to know one another. And not just one another, but who else competed way back when, and her talent performance in an earlier year. It’s like baseball fans at old timers’ day, and they even made the formers gown up for the evenings, which was a far better thing than seeing Yogi Berri in pinstripes.

So the scene each evening included the five judges, a bevy of current and former beauties, the grand dames of town who helped administer the program, and the combination of codgers and queens who took a high school stage and turned it into the closest thing folks in Williston, North Dakota, would take for a fashion runway.

And what could have easily been the setting for a bad setup joke (a NY Jew, a member of the Christian Coalition, and former winner looking like a ‘Pricilla, Queen of the Desert’ fan walk in to a room) turned into a rolling series of conversations on rural life, the oil boom, real estate, prior year contestants, current year expectations, along with a smattering of politics, and plenty of discussion about food and recipes.

This was all something that I signed up for solely to be able to say I had made it to all 50 states before my 50th birthday. Until the pageant, North Dakota had bewitched me. I had been near while driving cross country in college, but the entire width of South Dakota on US90 was as close as I came. Slowly, each of the final states peeled away. A visit to the University of Hawaii. A lecture in Anchorage, Alaska. Those two are often the tough ones. Hell, I’d been to Maine a half dozen times, and even Idaho on more than one occasion. But still North Dakota held out.

Yes, North Dakota ended up being the last one. And to cap it with a bit of time on the ground, and a volunteer project, well, that at least helps cement the memory.

But there was more, in the surprise of the social diversity found in this otherwise monochromatic flatland, in the pleasure of seeing real smiles and true happiness in the eventual winner, and also in seeing people, strangers initially, come together, and reach a consensus on which young woman with the tight abs and the scrubbed teeth will get to try this all over again, this winter, on a much bigger, much less forgiving stage, representing the state of North Dakota before the nation in the fabled Miss America pageant.

I wonder how the folks in Las Vegas will treat a new girl from the heartland? Now that’s a story! If only I could get a judging gig for the big pageant. Damn, I’ve already been to Vegas. But it’s always worth going back. Who knows, maybe this time I’ll get lucky.
Posted by Jon Ebinger at 3:31 PM No comments: