deer in headlights, or genius?

Washington was caught totally by surprise with John McCain's appointment of Alaska Governor Sarah Palin as his running mate. Officials sites with biographical information on Palin are down, people are scratching their heads to learn more than the basic facts that have put forth on her: conservative, NRA lifetime member, mother of five, first term Governor, former beauty contestant.

It seems from her walk out in Dayton that she was surprised as well. There doesn't appear to be any physical connection between the McCain's and the Palin's, though perhaps her husband's skills as a snow machine operator will come in handy during the campaign.

On the positive side, Palin started her professional life as a sports reporter, so clearly she has reason to believe she knows the score.
Posted by Jon Ebinger at 12:29 PM 1 comment:

so, it came down to this

It appears that the Democrats may have pulled their chestnuts out of the fire with the powerful speech, and endorsement, that Bill Clinton provided in Denver on Wednesday night. Doubts had lingered that the Clinton's were truly behind Obama, and plenty had circulated about various gripes and slights felt by the Clinton's and their respective supporters. Most if not all of that seemed to have been eliminated by Bill Clinton's appearance Wednesday night, his forceful language, and most of all his linkage of experiences and criticisms that he faced in 1992 with that which Obama has run into this cycle. No stronger endorsement could have been proffered. Whether this does unite the Democrats, and eliminates this story line for the media, and for the Republicans, remains to be seen.

Now about those faux columns on the grass at Invesco Field........
Posted by Jon Ebinger at 1:01 PM No comments:

that would seem to be the tone set by Hillary Clinton....I mean Bill Clinton.....I mean Hillary...Bill....my daughter.....my sister....my daughter....my sister.....has anyone seen Faye Dunaway lately? Does it really seem to matter? The Clinton appear to be one and the same, and the mixed messages that continue to come from the multitude of Clinton camps seem to do nothing but embolden the McCain camp, diminish the standing of the Clinton camp, and undermine the goal of the Democratic convention as a celebration of Obama and change. The false charges that the media is beating this drum are evident when you hear the statements from various Hillary supporters that have been posted in the past 24 hours, appeared in print, or on network or cable air, without solicitation, without prompting, and without apparent thought for the legacy of the campaign.
Posted by Jon Ebinger at 9:43 AM No comments:

I'd like a menu and a bucket to throw up in 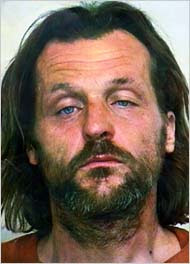 How much is too much?

When do you know you've reached the point in collecting things that you've got what you want, or that you have the right amount to proceed, or even that you have all that you could ever need, or use, at any time.

For Igor Kenk, the known remained unknown to him.

The Toronto bike shop owner was arrested and charged with the theft, and possession, which makes the story interesting, of 2,396 bicycles.

Now I've got a bunch of bikes. I actually try to ride them all, from time to time, but only once or twice have my bike totals ever reached double digits.

2,396. How do you get to that point. Is it OCD? Is it mental illness? Is it a compulsion to cleanse the streets of bikes? Is it some sort of conspiracy by the auto industry, or the public transit folks?

According to the New York Times, Kenk worked closely with a number of street people, and would clip locks, take the bikes, and then place them in one of several storage sites he had across town. Folks knew to look first for their stolen bikes at Kenk's but that seemed to matter little to him, until he was caught in a sting. A bicycle sting of all things. Perhaps I'll post another time about how low crime must be in Toronto for the authorities to put together a sting operation for a bike thief.

But here's the kicker, and what either explains all of this, or is just a good coda. Also according to the Times, and I'll quote here, "As the police gathered the mounds of bikes, they also found cocaine, crack cocaine, about 15 pounds of marijuana and a stolen bronze sculpture of a centaur and a snake in battle."

Some guys. They just can't control themselves. Still, this guy must have had some crazy parties.
Posted by Jon Ebinger at 9:51 PM No comments:

Slow day in blogville, so let's dialogue over who has been baseball's most notorious scoundrel, by position. Comments are most welcome. Most of these folks are first ballot scoundrels. Some take a little work to get themselves on the list. To make it, you have to be a scoundrel either during or after your play in the Bigs. And consistent scoundrel activity is a good measure for placement on the list.

You would think the position mattered.

Who is the Vice President, after all?

How many can you name?

OK, Mondale and Gore and clearly Cheney have redefined the position.

And what we have ahead is the most important decision a prospective party designee can make. But there are so many variables involved, so many people to please, that this, and every other decision John McCain and Barack Obama will make over the next 75 days, will be reviewed and scrutinized and blogged about in a way no other candidates have been screened ever before.

Hope we're all ready for it.

For without a solid VP choice on either ticket, it's Robert Byrd from West Virginia laying in waiting for the gold.

Will Obama stand for change with his running mate beside him, or will he have a representative from Washington's permanent class from the Senate?

Will McCain truly show himself to be a maverick, or will the strength of the Republican right suppress his desire for independence on his ticket?

Bob Costas won't be covering this race, but it will be more interesting. Now, back to Beijing and the Games.
Posted by Jon Ebinger at 5:10 PM No comments:

We lost a legend this weekend.

Most people don't know his name. Some may have have heard his voice. A number of us read his blog.

And anyone who came in contact with Leroy Sievers, at any time in his accomplished life, certainly remembers his presence.

Leroy was a large man, and was not shy about using that physical leverage to his advantage.

Fortunately, what was often his advantage was the shared interest of his colleagues, his co-workers in whatever newsroom he was in, whether that was at Nightline, at the Discovery Channel, and at NPR, where his blog postings and commentaries were read and heard by those both with and those who did not have cancer.

Leroy was a demanding colleague. Most demanding of himself, as the best among us often are. Diligent, capable, and with a discipline and a focus and a willingness to not just put in the hours needed to get a job done, but the energy and drive need to get that job done not just well, but quite well.

Leroy's battle with cancer, and the martial metaphor is apt, was just that. Leroy would not allow himself to become a prisoner. He fought, and for some time beat the odds. He had done battle in the media world before, and had come out on top from fights with public affairs officials, corporate flaks, and network executives. There was certainly no reason to believe he wouldn't defeat this consuming challenge.

His spirit and inspiration were legendary.

And the void created by this loss will not soon be filled.
Posted by Jon Ebinger at 11:37 PM No comments:

Is Michael Phelps amazing, or what? I can actually recall, reasonably clearly, the exploits of Mark Spitz back in Munich in 1972, so this is just remarkable. Can the guy even see with all the lights and flashes and people in front of him? What can the next 24 hours, or 24 months, be for this guy? Can any of us imagine?
Posted by Jon Ebinger at 11:59 PM No comments:

what, there's even more to the election this year?

Alan Rosenblatt and the Center for American Progress Action Fund featured an illuminating lecture Wednesday afternoon with David Perlmutter as part of their 'Internet Advocacy Roundtable.' Perlmutter was here in DC to speak about his book BlogWars, but wisely noted upfront that since the book was completed in December, just a bit has happened to advance the world of political blogs, though he feels what he wrote does remain relevent. Perhaps a recent history more than a reveal into a sea change in political communication. Perlmutter did a fine job advocating for traditional media while similarly advocating for an advanced role for citizen journalists, bloggers, and social networkers. I'll steal from Rodney King here, and similarly ask, "can't we all get along?" There's enough news and information on the campaigns, and out there generally, that there's quite enough room for all comers to the world of news and information. Hopefully all will aspire to excellence, and provide substance as well as style.
Posted by Jon Ebinger at 10:54 AM No comments:

Is sure seems as though the Beijing Games are becoming all consuming. Perhaps it's the smooth delivery of Bob Costas, or the porn-like cameras focused on the showers for the synchronized divers, or maybe even the remarkable swims that Michael Phelps has done, but it sure is tough to find something else to hold interest these days. Anyone know what happened to those Obama and McCain guys? Aren't they headed for some major speeches, announcements, and acclaim in a few weeks? Will we still care? The cameras and reporters will be there. But will the public return to the election?
Posted by Jon Ebinger at 12:17 PM No comments:

Faith in institutions continues to suffer, particularly when the weather forecasters get it wrong. Again. These guys call themselves professionals, with degrees, and years of study? Better relying on a gaming tout than a meteorologist for a forecast in any city these days.
Props to the Red Sox for separating themselves from Manny Ramirez. Without the Yankees having to spend a cent, the Bombers just improved their 2008 WS prospects significantly, while watching the Sox continue to implode. Perhaps this will augur a return to the '70's and '80's for these teams. If fashions can make a comeback, why not the recasting of this traditional rivalry. For my money, I'll take the '70's relationship, that worked out well for us
Posted by Jon Ebinger at 4:11 PM No comments: